It made me very happy last week to see the comet Neowise. They say it was first seen by people on earth this past March and it will not pass by for more than another 6000 years, though their assurance that it was not seen 6000 years ago seems a wee bit presumptuous to me. It means we have not found a record recorded in the fashion we trust that this comet was seen — that is a much different thing.

Still I loved going out to see it standing in an empty intercity bus terminal parking lot in Portsmouth, New Hampshire, last Thursday. A comet that does not come with any stories, legends, memories, religious significances that we know! I wanted to sit down and write a short story right away!

But when Rosalie Sugrue of Aotearoa / New Zealand shared materials about the mid-winter (Southern Hemisphere) rising of the Matariki star cluster  which is filled with so many stories … and even more legends when it is also identified as the Pleiades, it seemed the perfect counterpoint. So this is from Rosalie’s study.

In Maori tradition the rising of the Matariki star cluster begins the New Year. In June or July the cluster appears low on the horizon before dawn. The first new moon after their appearance is a time to look to the stars and remember the ancestors and celebrate with singing and dancing and feasting around a bonfire. It is also the time to consider the future and prepare for new crops.

Legends include: the stars are the houses of the dead; Maori legends differ between seven and nine individual bright stars and what they represent. Some give each star its own meaning and guardianship. Others say they are the eyes of seven chiefs standing sideways or that they are “the gods’ eyes.” Still other legends say it is a group of maidens with their mother, or the prow of a great waka. Finally one tells of a star so bright that the god Tane was jealous and plucked it from the sky and hurled it away smashing it into many pieces – “the little (riki), eyes (mata), of Matariki”

(Adapted from a reflection by Rev David Bell, “Touchstone” July 2006)
It is winter and the hard and bitter frosty nights
open up views into the very heart of the universe.
Orion dominates the southern sky and Matariki rises.

Each year at this time the gods,
The Holy, come down and insist we give account.
Why we have awakened and to what end?
The questions grow more complex
yet they track to the same orbit.

In our land Matariki signals the recurrence of the cycle
above the dimly comprehending planet.
We are children of stardust;
yet our whakapapa is more than metals
of ancient stellar explosions, our minds
more than electro-chemical pathways in brains .

In truth we are the universe looking at itself.
We are the fish-hook of Maui,
we catch ourselves, our consciousness,
pull it up and out of the deep and find new meaning.

Truth and wisdom are pulled willingly
into those orbits of soul where tacit knowledge
is more potent than intellect
and is found in ancient wisdom.

Myths and Legends of the Pleiades
The Pleiades are among the first stars mentioned in literature, appearing in Chinese annals of about 2350 BC. The earliest European references are in a poem by Hesiod in about 1000 BC and in Homer’s Odyssey and Iliad.
The Bible contains three direct references to the Pleiades in Job 9:9 and 38:31, and Amos 5:8, and a single indirect reference in the New Testament. This latter passage (Revelation 1:16) describes a vision of the coming of the Messiah – who holds, in his right hand, seven stars…
Tales of the Seven Sisters have been passed on by word of mouth, and through poetry, art, music and architecture, including the Greeks, Australian Aborigines, Chinese, Native Americans, Egyptians, Persians, Indians and Polynesians. The Zuni tribe in New Mexico called the stars the ‘Seed Stars’, and when the cluster disappeared every Spring, this was the time to sow. Other cultures believe they seeded the planet and are the original seven mothers of the earth. 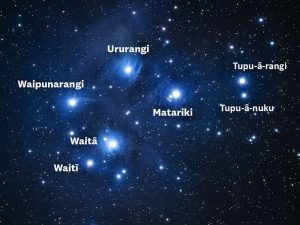 Southern Hemisphere Orion, the hunter, is upside down  In the Northern the figure known as Orion stands upright.

2020 is half over
When it began we welcomed a new decade
With hopes of new vision and 2020 insight
We prayed that it be a significant year
2020 is half over
It has been more significant
Than any of us could have possibly imagined
A year that is shattering lives and livelihoods
All over the world in an unprecedented way
Yet there has been unprecedented global cooperation
People have had to pause and reconsider priorities
We give thanks for the year 2020
With Pleiades rising and a new year beginning
We will continue looking for new insights
And commit to serving the bringer of light. R. Sugrue

This entry was posted in Uncategorized and tagged Aotearoa, Matariki, New Zealand, stars. Bookmark the permalink.